I was honored to be a part of the annual ToonFest event in Walt Disney's hometown of Marceline, Missouri last week. The two-day celebration honors the memory of Walt Disney and the cartooning profession through activities including programs that feature guest cartoonists. Among the other headliners brought in to give presentations were Hilary Price, Bill Hinds, Eddie Pittman and the dynamic Guy Gilchrist.
On Friday, the team spoke to over 400 high school and college students, who were bused in from surrounding communities. Event organizers reported that this year's attendance was a record high.
One of the highlights, is a street parade complete with strolling performers and several bands. Guest artists are each featured as "Grand Marshal" and ride the parade route down the original Main Street USA (inspiration for the Disney parks' street of the same name) in the back of classic pickups. Following the parade, the team reprises their talks at the Marceline Community Center. Later, we were taken to Walt Disney's boyhood farm for a ceremony at the "Dreaming Tree," where youngsters Walt and his sister, Ruth reportedly spent many childhood hours gazing up through the branches, to wish upon their star. With much pomp and flair, each artist was re-introduced, brought before the assemblage and inducted into the "Order of Plantears" (each are crowned with a hardhat featuring Mickey ears). Young Mouseketeers led each of us to our respective spots to plant our own "dreaming tree." A grand BBQ picnic at the farmstead brought the event to a festive conclusion.
Throughout our entire visit, we artists were met with an abundance of genuine welcoming warmth and charity by the good folks of Marceline. Shortly after landing at the Washington airport on my return home, I walked through the crowded corridors of fast-paced indifference. I was shoved aside without apology from one of the self-absorbed pushing his way to the VIP lounge. It took every effort to restrain myself from boarding a return flight to Marceline with intent to seek asylum. 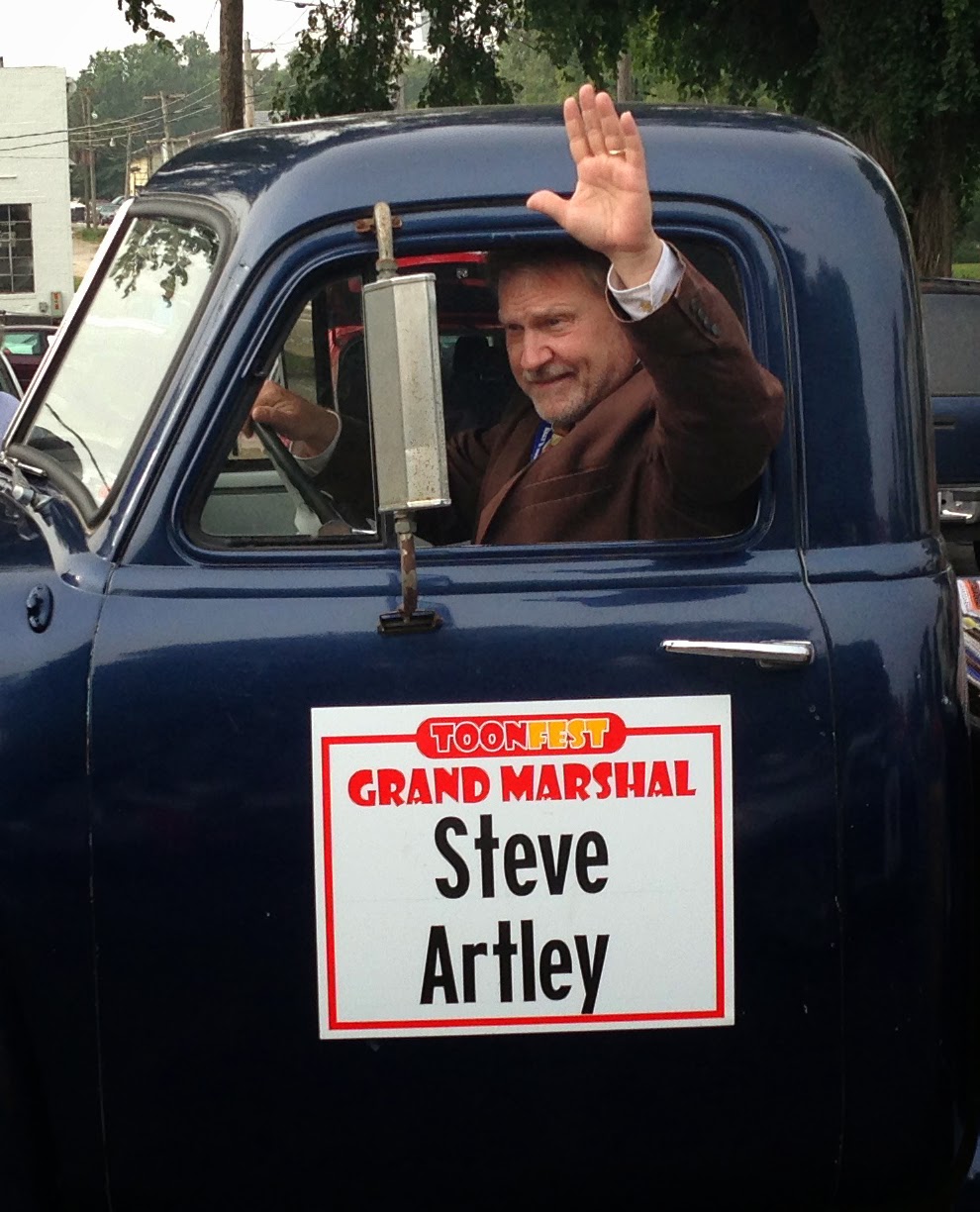 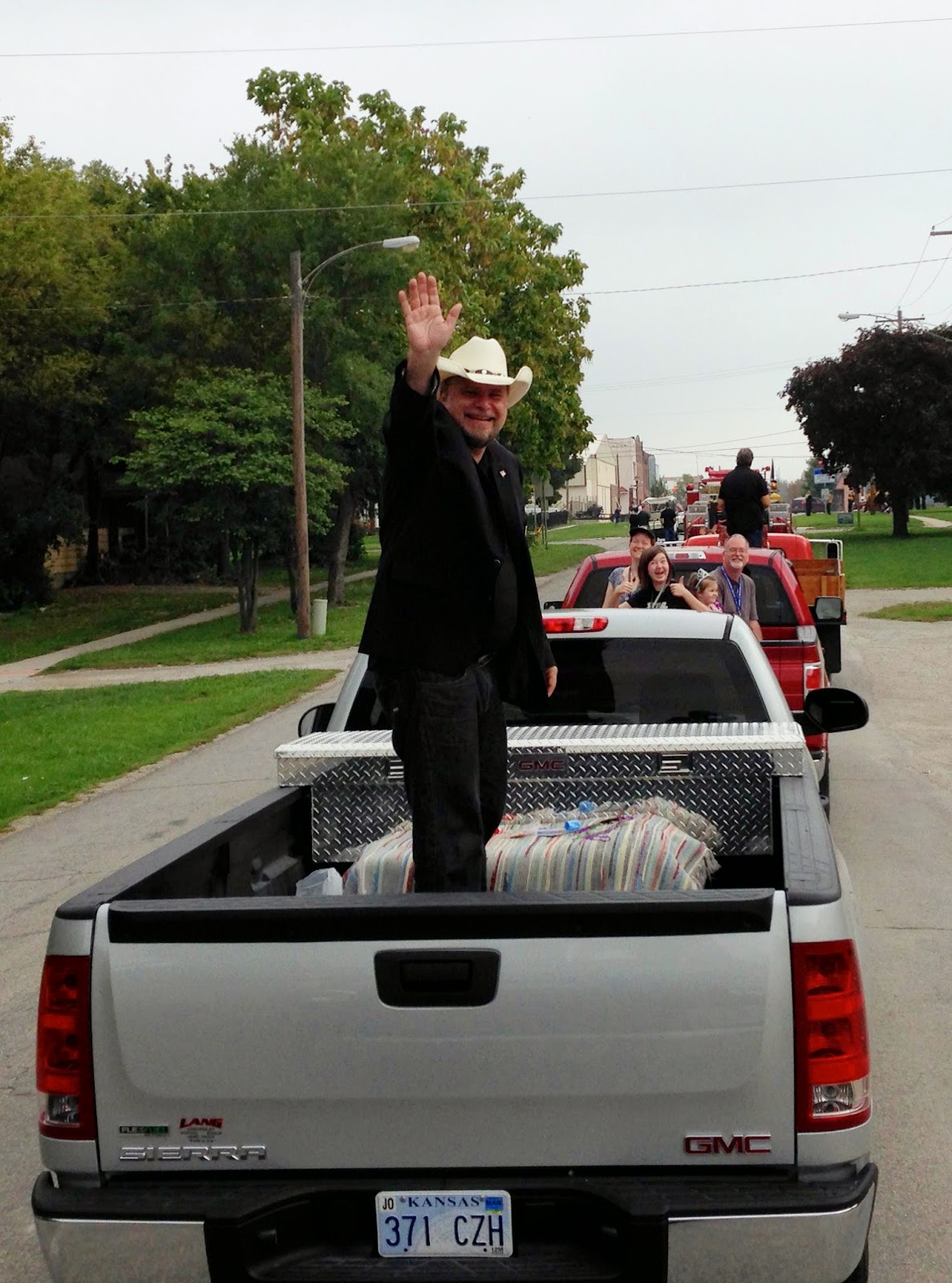 While lining up for our second pass down Main Street USA (above), Guy Gilchrist is still stuck in parade wave mode. In front of Guy, is the Pittman Pullman Car, complete with three berths and a restroom. Leading the cartooning crew is Tank MacNamara creator, Bill Hinds riding high in his parade tank.

During the last leg of the parade route, the classic 1948 pickup carrying Hilary Price overheated and came to an abrupt Disneyesque halt, complete with gurgling sound FX and billowing steam. Disney animators and Foley artists couldn't have done it better. Not to be left knuckle biting and helpless at the roadside, the ever resourceful Hilary got out and pushed, with some assistance by a couple of onlookers.


(Pictured below) From my vantage point of the tailgate of the vehicle ahead of Hilary, I gleefully iPhone photographed the following sequence. 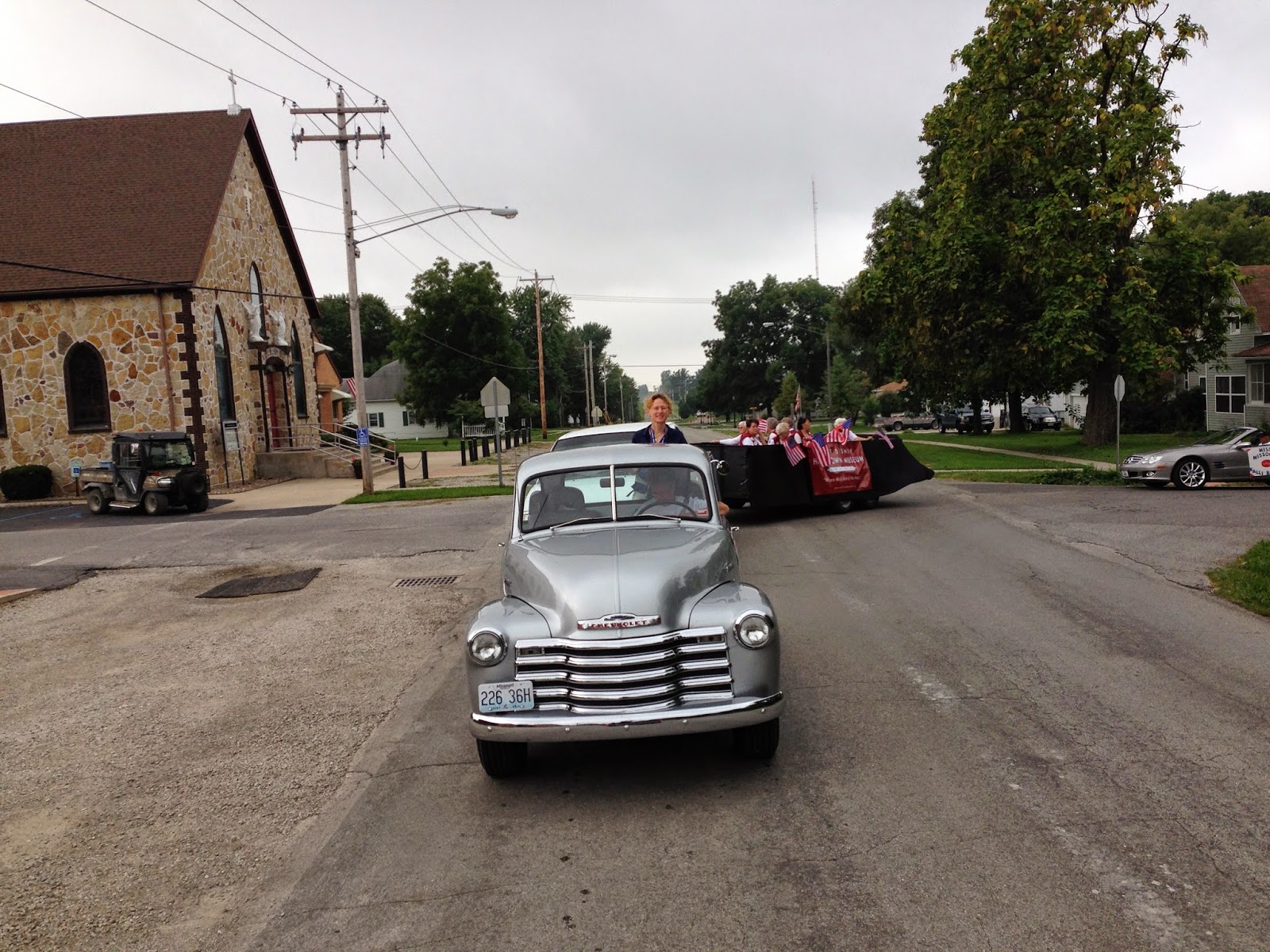 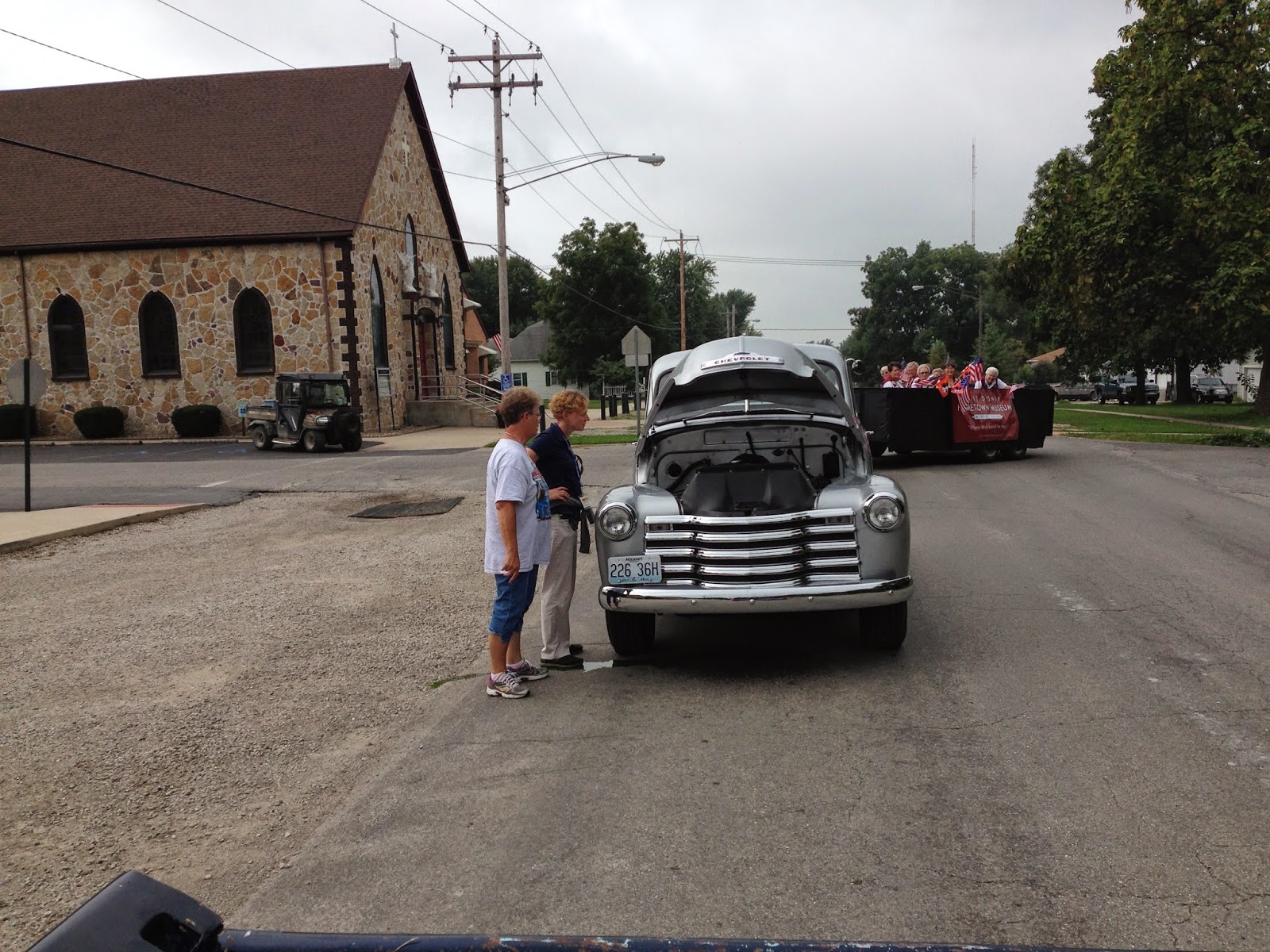 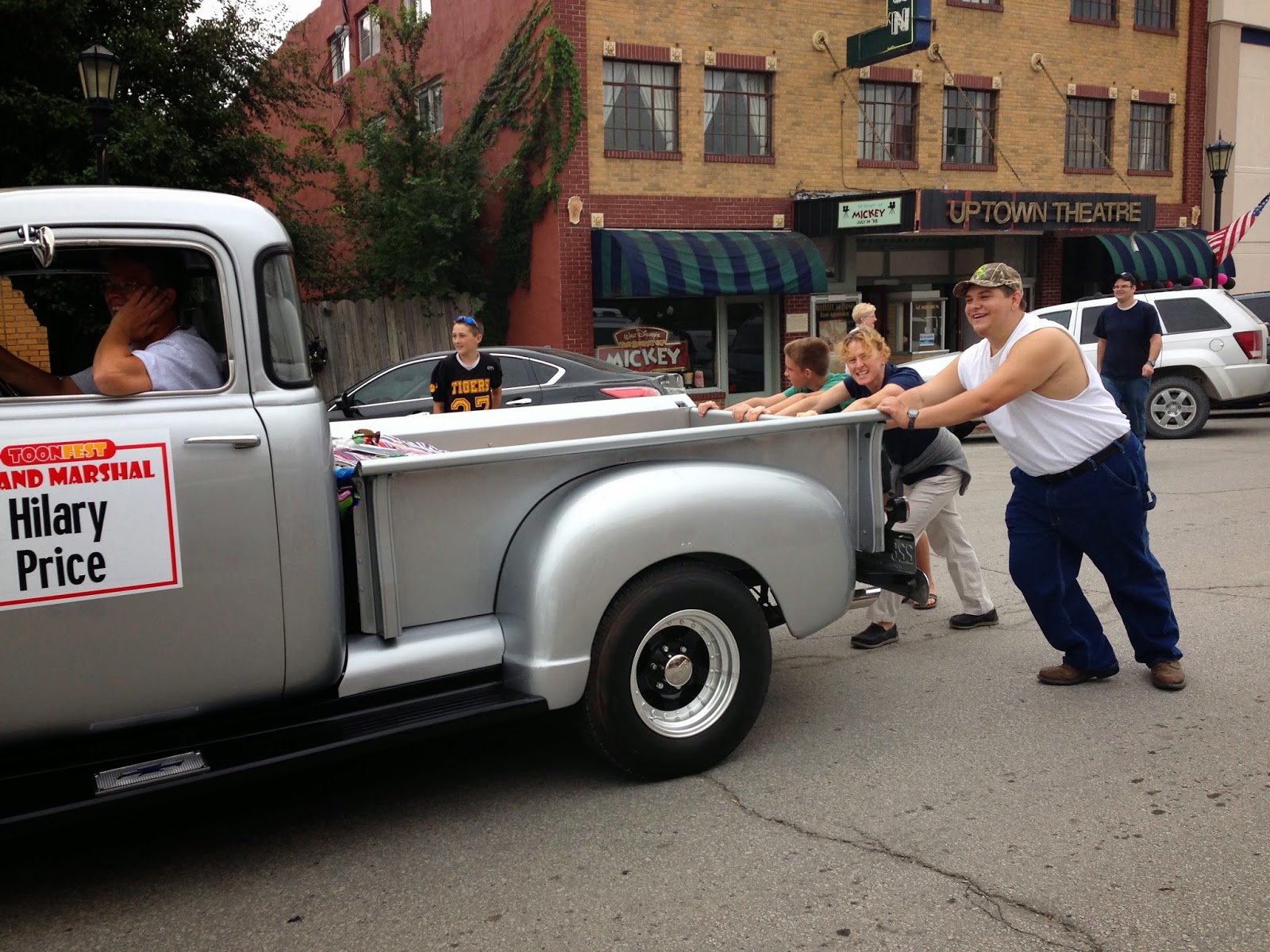 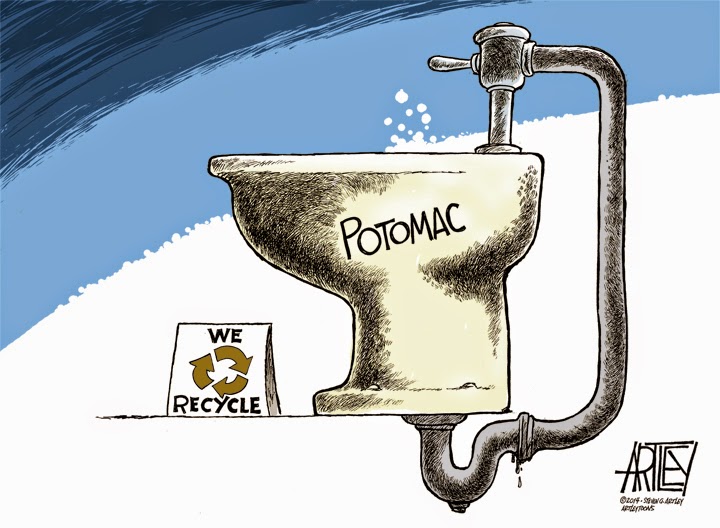 Recent Toon: "The Grapes of Graft" 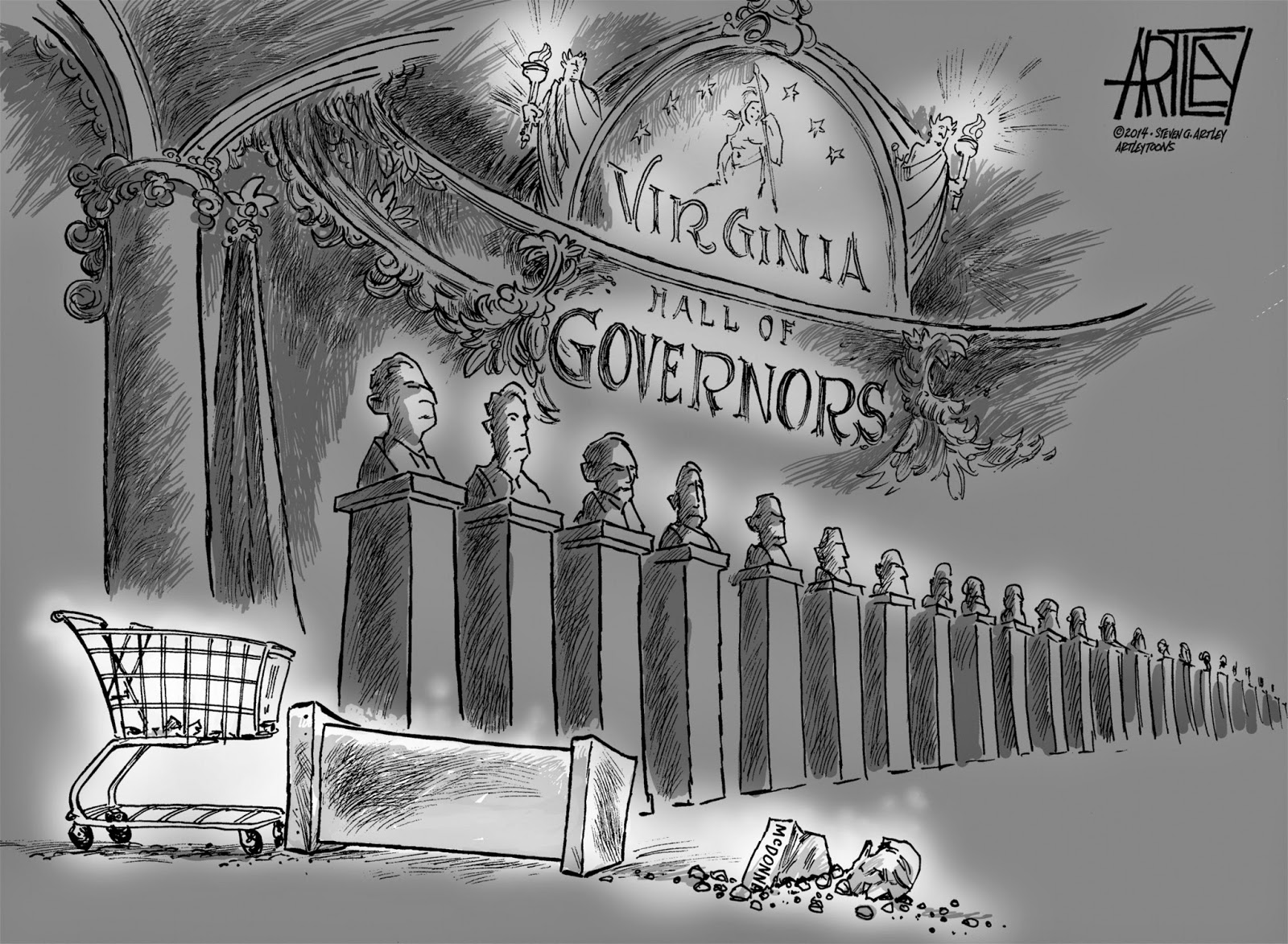 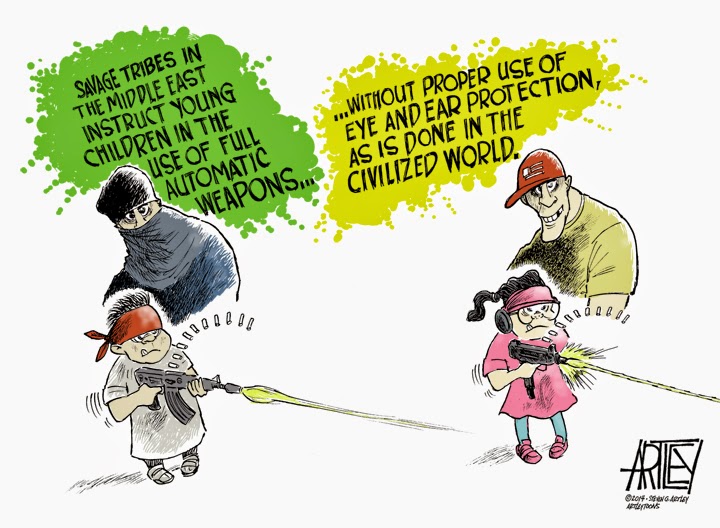