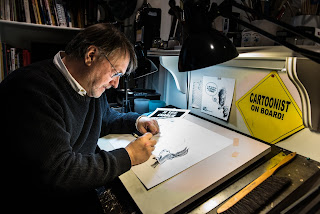 [ALEXANDRIA VA] Following a 30-year political cartooning career, Steve Artley has transitioned his satirical prowess to another form: radio. A few weeks ago, journalist and Public Radio broadcaster Michael Pope contacted Artley with a request to be a regular contributor to the podcast Transition Virginia, hosted by Pope and political strategist, Thomas Bowman. Artley’s background in music, theater, and voice work go into the development of the two minute segments that are a mix of comedic skits and musical parody. Artley himself scripts, performs the music, voices the characters, and mixes the audio spots for broadcast.

Artley continues to maintain his illustration, advertising and marketing support company, saying this new venture is “a reasonable fix for my political satire addiction” left vacant from retiring his "political cartooning pen” earlier this year.