Is Recycling a Cartoon a Ripoff?

There has been recent debate within the cartooning community
regarding the legitimacy of a cartoonist "recycling" one of his previous
cartoons.

Well, I admit here in open forum that I've done it.

This cartoon (above) from the 1980's addressed the growing popularity
of assault rifles among gun enthusiasts. Since the 1994 ban ended in 2004,
these street sweeper killing machines are abundant in many patriotic
American's urban defense arsenals.

While archiving old originals in 2010, I ran across it and decided to
re-release it to a completely new and larger audience. I scanned it,
added color (below) and sent it out for publishing as-well-as submitted
it to my syndicate among the other offerings. 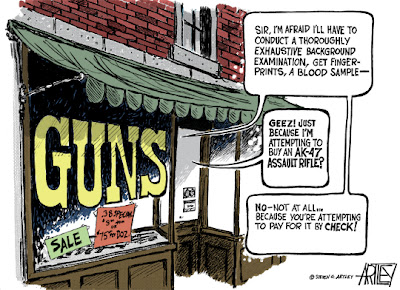 I didn't consider for one second that I was duping anyone or violating
an ethics code, or even that I was being lazy. Neither was it larcenous,
as I own all my originals, copyrights, and publishing rights. I saw it as
addressing a topic that keeps resurfacing. Since it was first published,
an assault weapons ban had come and gone. Of course, the issue of
effectively screening buyers has remained unchanged. It struck me
how the cartoon was so apt for current times. So, I dressed it up with
color and sent it out to a whole new audience through a new technology
that was not available 25 years ago.

In the current cartoon reissue debate, some have argued this is not an
unusual practice and many cartoonists have done it. The practice of
recycling one's work has been used in other creative media as well.
Cecil B. DeMille did Ben-Hur twice. Hitchcock remade several of his
films with technological upgrades and issued to new audiences.
Movies have gotten released and re-released to new generations of
moviegoers. Even Beethoven, Mozart and a host of other classical
composers have reused themes in subsequent works.

In retrospect, perhaps I should have added a note at the bottom of the
cartoon alerting readers to it being a reissue that I had done in the 1980's.
If anything, it would've added impact to the issue.

New Member of the Family 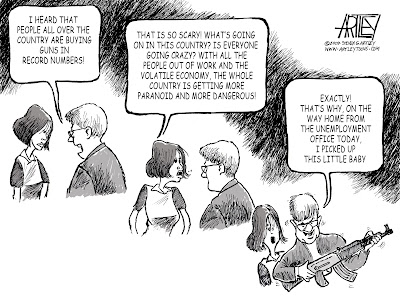 This cartoon from 2009 demonstrates my desperate attempt to persuade
people not to participate in the growing gun culture.
Well, a whole lot of good that did.

For this one, I did something that I usually try to avoid. I used typesetting
for the text. But, with a looming deadline, it was easy to be weak. What
bothers me is the typeface. I regret not going online and finding a more
appealing comic font.

The cartoon was inspired by a married couple I know who decided it was
time to get a handgun. These folks are in the eighties, and they suddenly
came to the conclusion they needed to arm themselves.