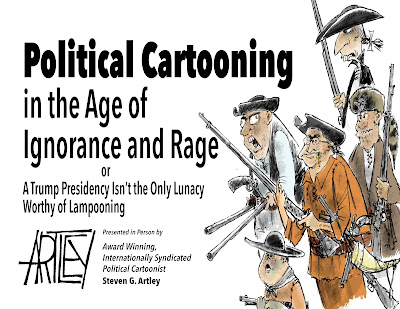 Co-sponsored by SPJ-DC, ASJA and our hosts, the Institute on Political Journalism. Light refreshments will be served.

"I am a seasoned professional political cartoonist obstinately entrenched in the traditional school of single-panel, cross-hatching renderers who use symbols, hyperbole and metaphor along with a high dose of satire to issue a succinct political statement — a heavily biased, one-sided, grossly unfair, flagrantly distorted, myopic statement on current affairs."
The pen is mightier than the sword, especially in the hands of a skillful political cartoonist, such as Steve Artley. Based in Alexandria, VA, he skewers the foibles of the world with his bold and powerful strokes.
Join Artley as he gives you a glimpse behind the artist’s pen, presents a primer on creative inspiration, artistic development and technical production of an editorial cartoon. See how historical events were lampooned over the years through this most uniquely specialized lens of political commentary. You’ll see the components that make an editorial cartoon successful along with the pitfalls. Also covered are how the changes in news media has affected editorial cartooning and what the future holds for this distinctive journalistic medium.
Artley’s editorial work has appeared in nearly every major newspaper and magazine throughout the United States and Canada including The Washington Post, the New York Times, TIME Magazine, and Newsweek — with his syndicated distribution worldwide. Twice earning the “Best Editorial Cartoonist of the Year” award from the Minnesota Newspaper Association, Artley received First Place six times in the annual Virginia Press Association News Contests. He is a member of both the National Cartoonists Society and the Association of American Editorial Cartoonists, where he served on the Board in 2016.
A highlight for the evening will be a drawing for an original cartoon, donated by the artist.
This program is co-sponsored by the D.C. chapter of the Society of Professional Journalists, the American Society of Journalists and Authors and our host, the Institute on Political Journalism. Light refreshments will be provided.
DATE and TIME:

If you’re in the area and have nothing better to do, like a root canal or prep for a colonoscopy, then come on down and spend the evening with me babbling about the often misunderstood and rapidly diminishing world of EDITORIAL CARTOONING. As a 35 year veteran of second stringers in the field — I offer some insights into the trade, the perils, struggles, challenges to free speech and offer a glimpse behind the curtain in the development process — among other things. And, I will share samples of my outrageously irreverent, often left-leaning (occasionally right-facing) political renderings. We’ll end with a Q & A session, so bring your slings and arrows (metaphorically); no tomatoes though, please… I’m allergic.

AND, there will be a cartoon as a door prize. Suitable for framing, this little gem also makes a good coaster, placemat, doormat, bathroom mat (absorbent Strathmore Bistrol vellum) and makes the perfect target for the NRA.

Tickets are a measly 5 bucks. (tickets are going fast, so get on the stick!)

Here’s the link with all the poop that’s fit to poop: an evening with editorial cartoonist steve-artley


"Before the Truth Has a Chance to Get Its Pants On" 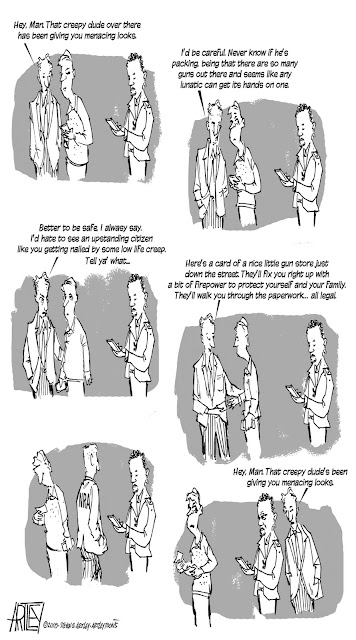 "The Harder It's Pulled" 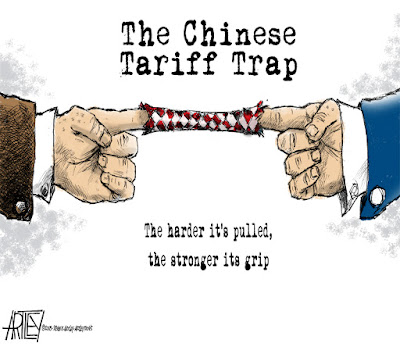 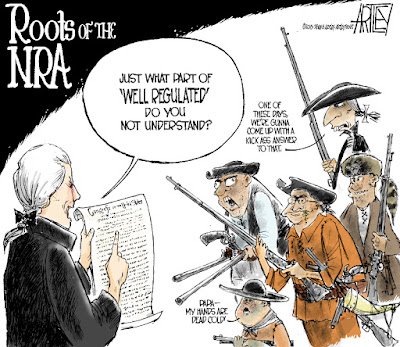 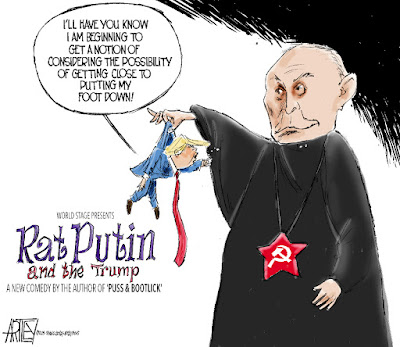 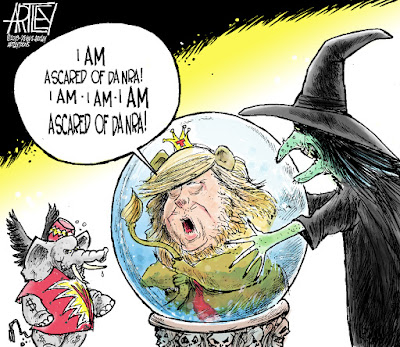 The Harder It's Pulled

"The Harder It's Pulled"

"It's a Wonderful Strife" 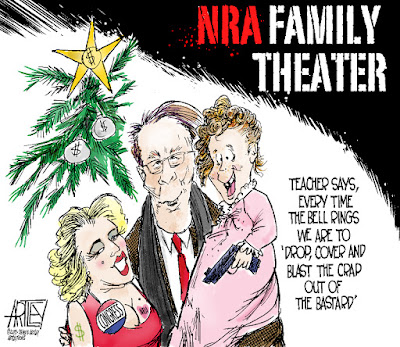 "It's a Wonderful Strife" 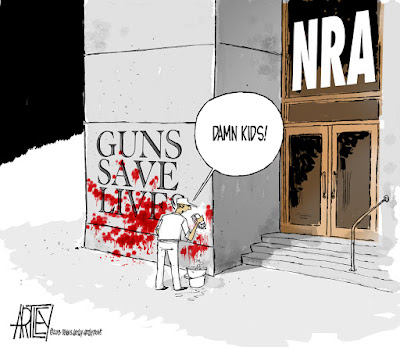