The Aphelion Arc anthology series is still on the drawing board (in the literal as well as figurative sense). Later this summer, we will be launching our website that will feature EXILES OF NOD. Other stories will be premiered sequentially as they are produced. Once the three stories from each issue are complete, they will be collected into magazine format, printed, and made available for purchase. Printed editions will also include a BONUS feature, called the "Nerds Appendix." It is a special section of the magazine that'll include notes on select stories, backstories, and other items of interest. In some issues, the "Nerds Appendix" will also feature working sketches and glimpses of the development process. Please bookmark this website to your favorites and keep checking back. Launch will be later. Link to: http://aphelionarc.com/

On March 20, a small band of Washington DC area cartoonists were treated to a private tour of the Prints & Photographs Division at the Library of Congress. One of our friends is curator at the LoC P&P Div and arranged for us to view a number of original cartoons and illustrations. It was a real thrill to get up close to an original Yellow Kid (the first American newspaper strip), a Doonsbury, works by Thomas Nast, Art Young, Rose O'Niell (the late 19th and early 20th century illustrator best known for her creation of the creepy-cutesy "Kewpie" Doll, and many others.

During the visit, we toured the archives where the stacks housing hundreds of thousands of collections are stored. We also stopped downstairs to view select first edition comic books from Superman, Spiderman, Amazing Fantasy, Crypt of Terror, and a host of others from the archives. Our MAGIC BULLET No.6 is now also part of the collection.

Distric Comics' Magic Bullet hit the streets this week throughout the Washington DC metropolitan area and Richmond. To see a list of places to get your free copy, visit DC Conspiracy website at magicbulletcomics.com.

DC Conspiracy's Magic Bullet, the Washington DC comic newspaper is at the printer and will be will be distributed to area newsstands and comic book stores within the next week or two. Visit magicbulletcomics.com to find the nearest comic outlet to you so you can get your free copy.


This issue was edited and art directed by cartoonist (creator of the strip "Curls," among numerous other creative ventures) Carolyn Belefski. She did a bang up job of pulling all the submissions together, coordinating advertising, and overseeing the new masthead design.


The center spread feathers an abridged version of a story from the upcoming illustrated anthology, the Aphelion Arc (scroll down to see more about that). The premiere issue is scheduled to be released in June.

Mark Your Calendars... May 4th is FREE COMIC BOOK DAY! 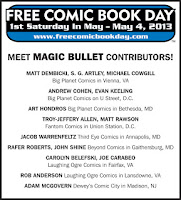 Every year, comic book stores throughout the world hand out free comic books to anyone who visits their shop. Started in 2002 by the North American comic book industry, FCBD was designed to generate a new crop of comic enthusiasts. Every first Saturday in May, thousands of independent comic book shops throughout the country opened their doors and handed out designated comic books. The phenomenon soon caught on and spread to other countries. Now, it's a worldwide phenomenon.


Artleytoons will be a part of the May madness. On May 4th, I, along with fellow 'tooners Matt Dembicki and Michael Cowgill will be at Big Planet Comics in Vienna, VA to do the grin, meet & greet bit. Stop in and look for my grinning face. I'll be handing out preview material on my upcoming Aphelion Arc illustrated anthology series. Click on the inset image to see the full list of participating comic book shops in the area, and which other cartoonists you may like to meet. If you are not in the Washington DC area, check local listings for a participating comic book store near you.

In real life, "Cat," is a 24 year-old elementary school teacher in North Carolina. She was my model for the female leading role in "EXILES OF NOD," a story from my upcoming illustrated anthology series the Aphelion Arc. I changed the hair style and modified the complexion a bit, but Cat had the basic facial structure, large expressive eyes and haunting beauty I was seeking for the story.

Cat is affable, charming, intelligent, and takes direction so well. She also had helpful suggestions for poses. Hopefully she'll be available for future episodes, as I can see her adapting to many roles in the anthology.

Just because I put editorial cartooning on the back burner, doesn't mean I'm ready to go on the pyre. I've been pouring my creative energies into a new venture… an illustrated story series (a.k.a. "graphic novel"), entitled the Aphelion Arc. It will feature an anthology of stories, eclectic in content and theme, yet share a Twilight Zonian twist, with an occasional dose of O. Henry irony.

A cartooning newspaper, DC Conspiracy's Magic Bullet asked me to do the center spread for their upcoming issue. So, I thought it'd be an opportunity to promote my new series by releasing an abridged version of one of my stories. The paper is due to be in comic book stores and newsstands by April 1.

Below is the promotional teaser I've put together for the premiere issue's feature story, EXILES OF NOD. The first issue of the Aphelion Arc is targeted for later this summer. Meanwhile, I will post the Magic Bullet spread at www.aphelionarc.com and here, once the paper has been adequately distributed.

Although the first issue is still in production, I have been toying with cover mockups.  The first issue will focus exclusively on the EXILES OF NOD story, along with the "Nerd's Appendix" (see below).

The issues will also include notes relating to some of the stories. Accompanying the science fiction pieces for instance, the notes will discuss the technologies of long term hibernation and warping the space-time continuum to travel great distances. Other stories set at a particular time in history, or ones of a contemporary theme will provide historical notes, or general background. This area of the magazine may also include working sketches or vignettes of the development process.