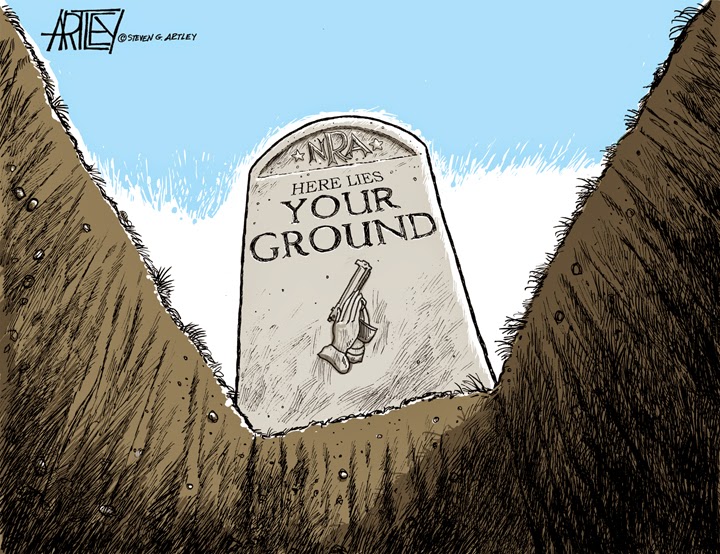 Out of the ARTLEYTOONS Vault 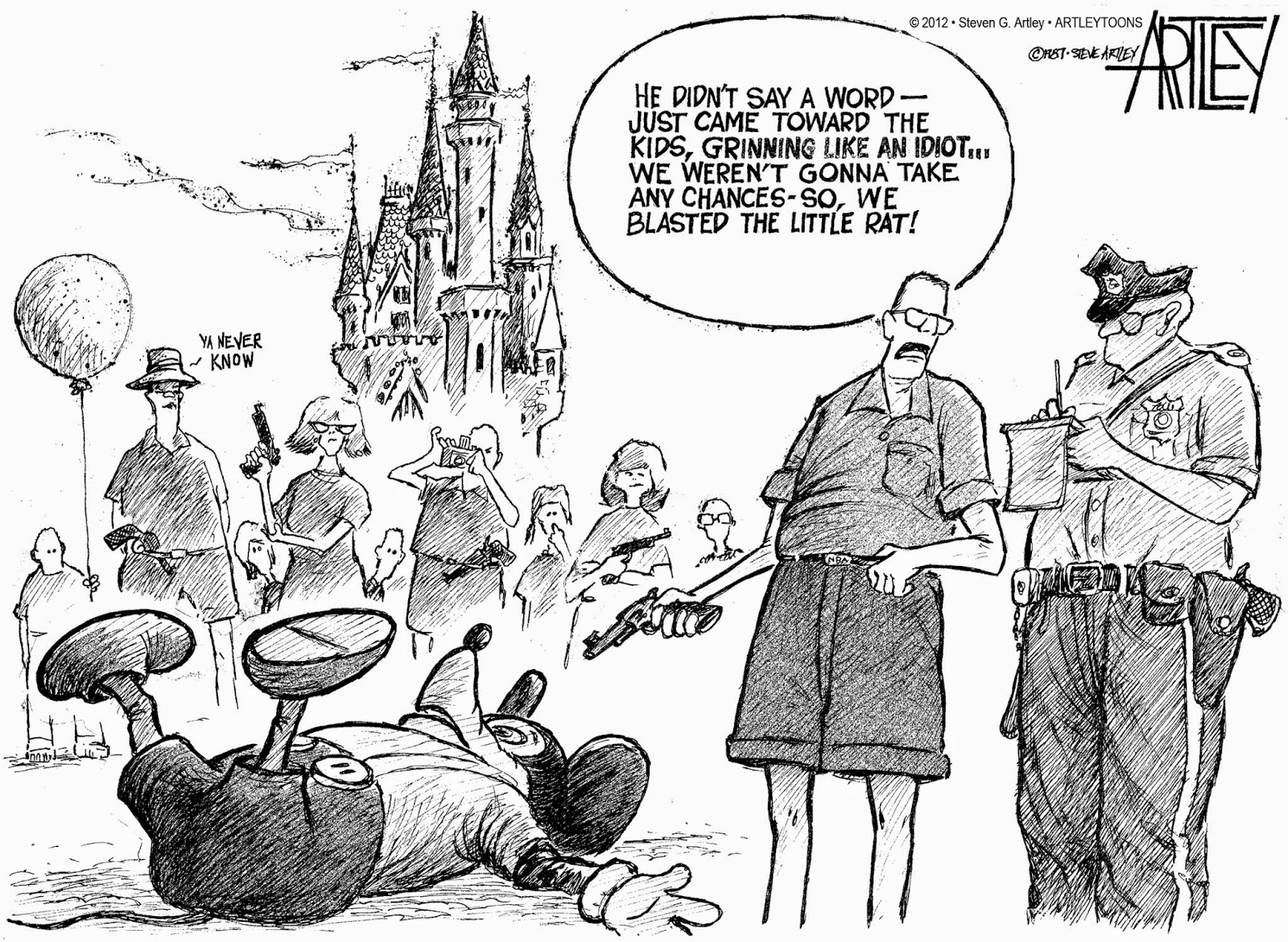 As I recall, I did this 1987 cartoon in reaction to Florida's passing a landmark "Conceal and Carry" handgun law. At one point, I had the notion to colorize it (on the board) and rather badly botched the job, I'm embarrassed to say. I scanned it in, removed the color, cleaned it up a bit, and updated the copyright for posting here.
2 comments: 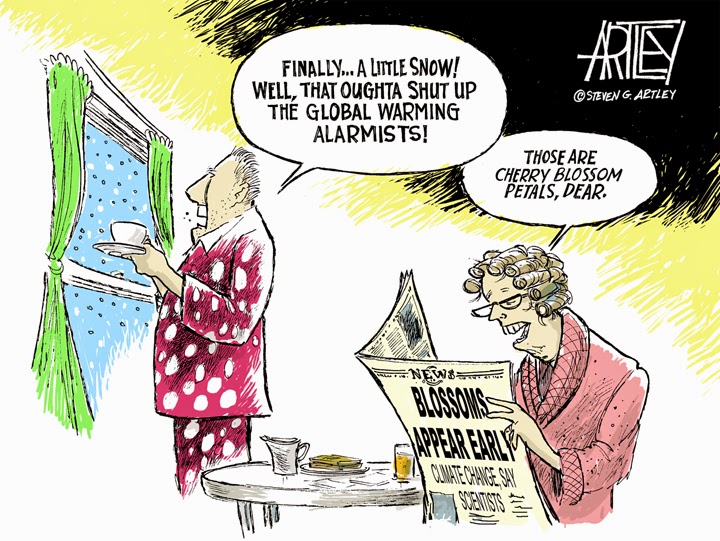 
The single largest tourist draw in Washington D.C. is cherry blossom time. Hordes of people from all over the world book their DC travel plans to coincide with this spectacular event. This year however, the trees bloomed much earlier than usual. So, by the time the hoards arrive the blossoms will have been well past their peak. There were reports that this early blooming was due to the "inconvenient truth" of climate warming. Knowing this topic pushes buttons, and being in the button pushing business, I jumped on it… Push, baby, push!
2 comments: 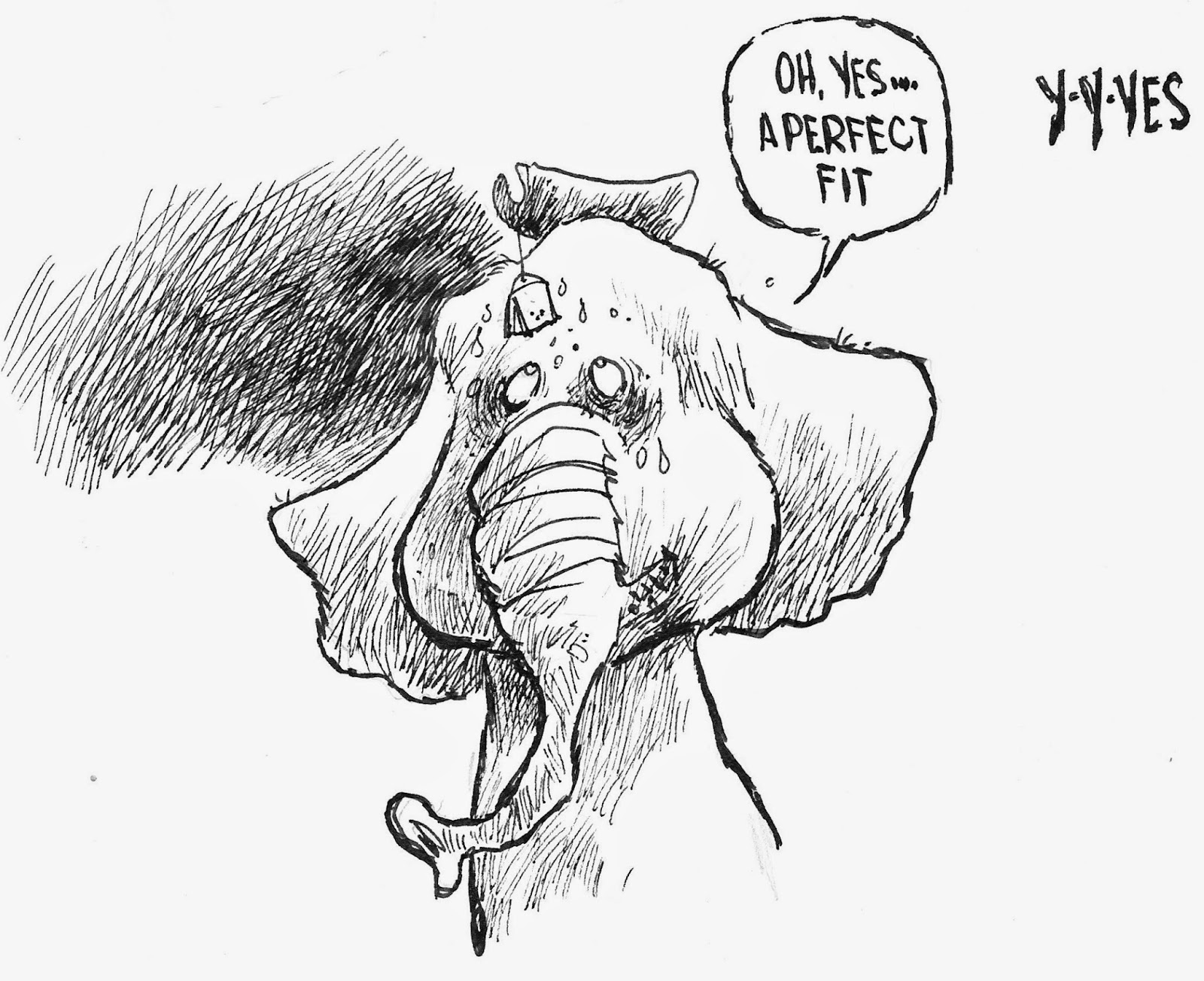 This was the first draft of a cartoon I did a couple of months ago. Because of changing events of the time, I took it another direction (see December 01, 2011, "If The Newt Fits"). While cleaning out files today, I ran across the initial drawing, and thought it might be worth breathing some life back into it.

The next step (below) was to scan it in and make some fixes to the black line base. Usually, I prefer to hand draw my dialogue lettering. I feel the lettering is part of the art and allows a bit more of the flavor of the cartoon to be reflected in the strength and shape of the words. Since I had already scanned in the work, I decided to cut and paste letters from another cartoon of mine. I searched through the archives and found one (also from December of 2011, "Merry TSA-Mas) that had the letters I needed. Perhaps it would have been just as easy to do the lettering on the board, then scan it in. But, I chose this method instead. I used my graphics tablet to draw a new, cleaner balloon and repositioned it in the drawing.  I also added more crosshatching and made the drawing fit my usual format ratio. 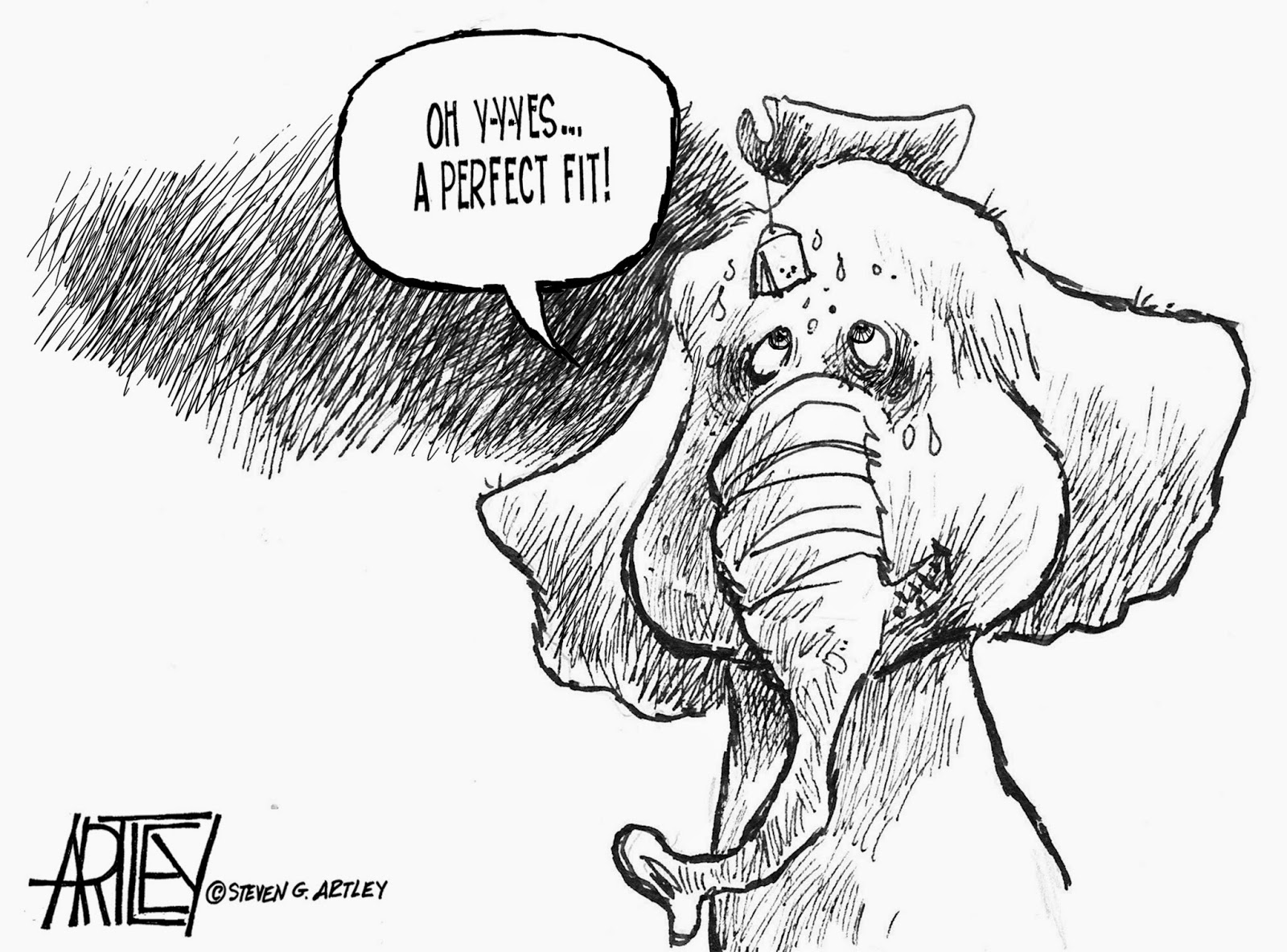 The next step is to add shading and color. Certain publications to which I submit use only black & white (grayscale), while others use color (RGB for online and CYMK for print). I send the color out as RGB and let each publication follow their own specs for separations for the 4 color work (Cyan, Yellow, Magenta, Black). 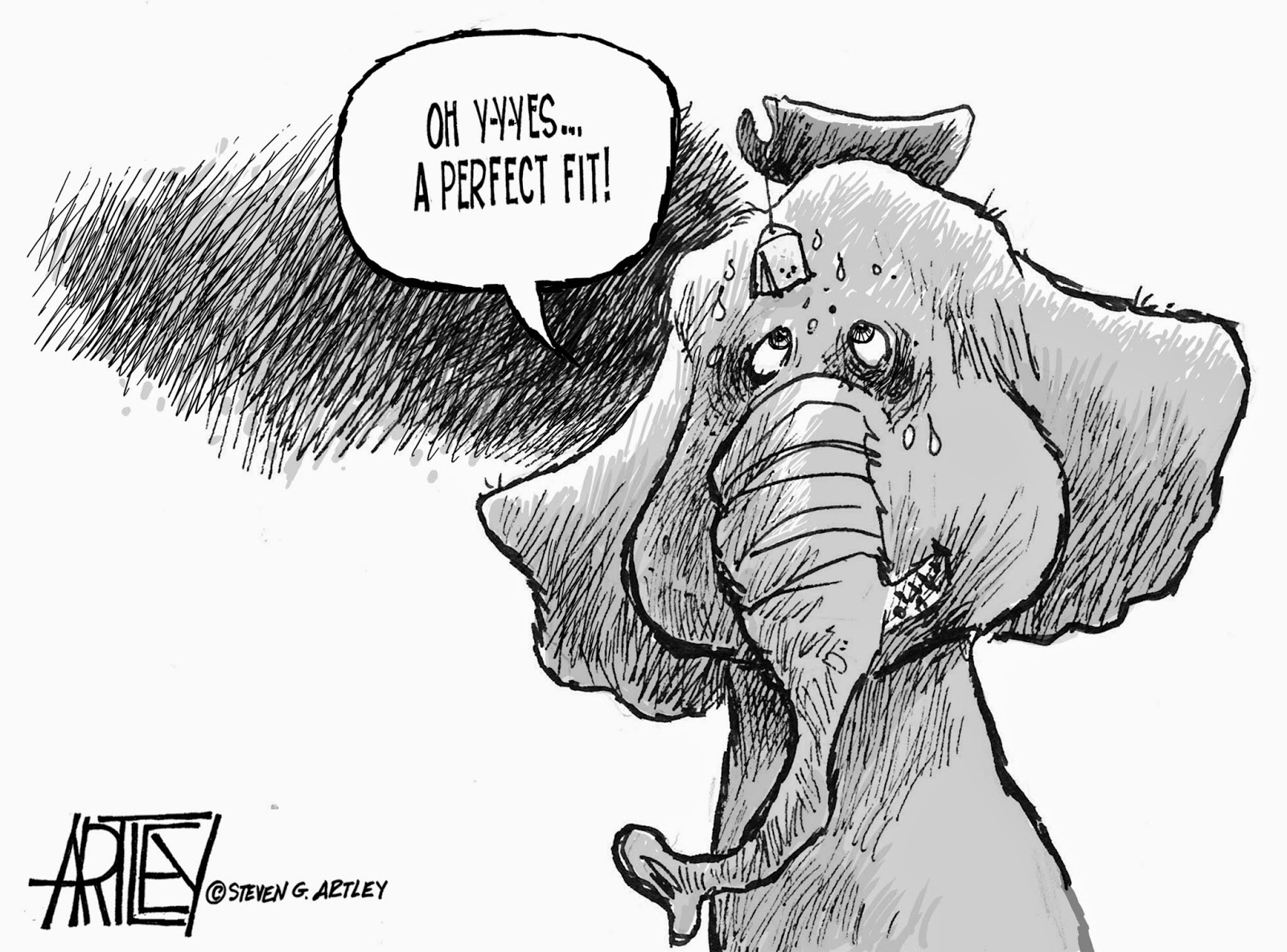 Working in PhotoShop, I adjust black & white levels for the scanned in artwork (the black base). This adjustment makes the base drawing strictly black and white (no in between tones). It also significantly reduces file size. Then, I add layers to put in shading and color, add my signature stamp, and save the original psd file. From that I save copies in RGB and Grayscale. The grayscale version will often require some extra adjustments, as colors don't always make the transfer very well.

And, here's the final result: 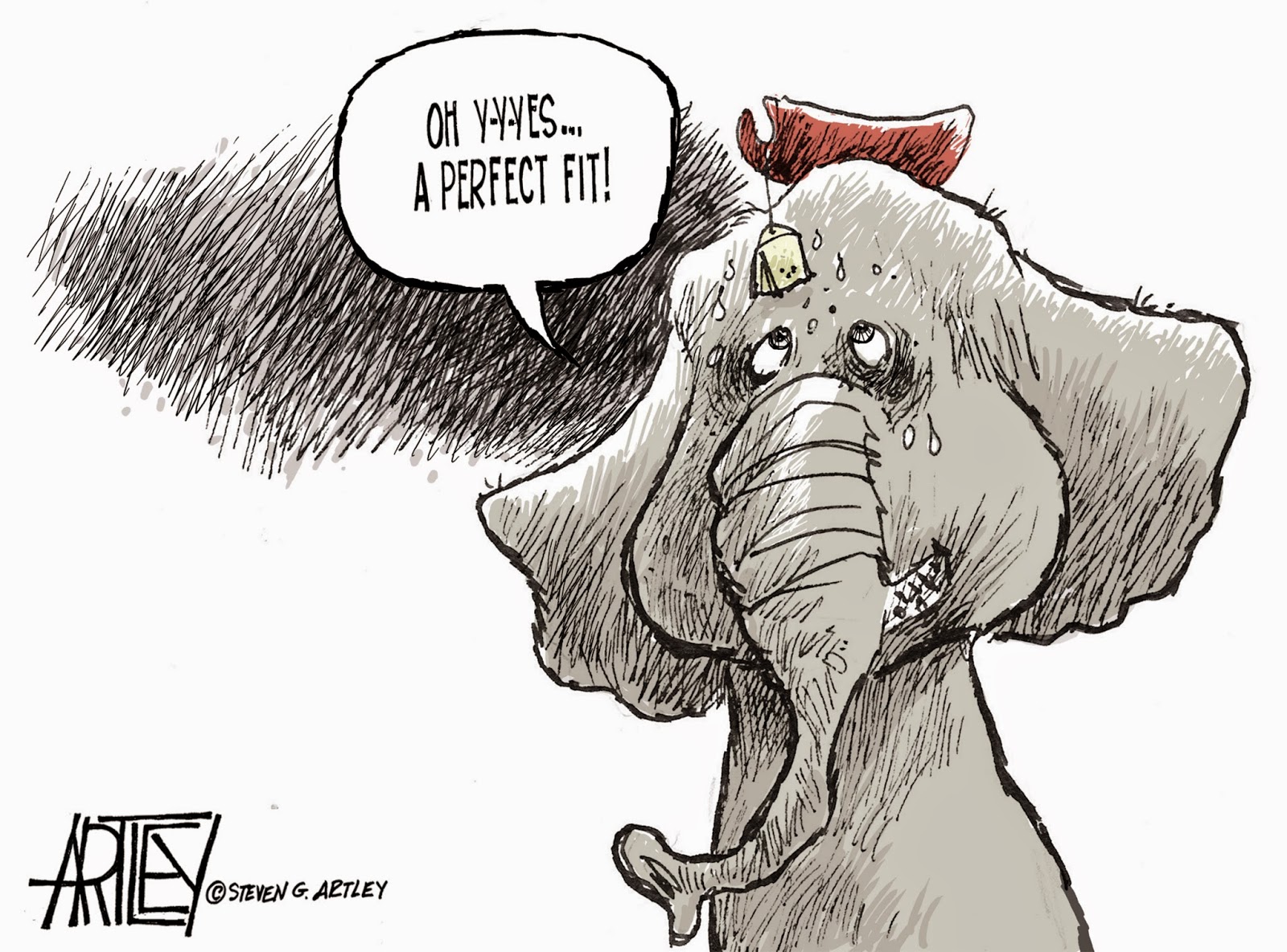 In this particular cartoon, the differences between color and grayscale are fairly subtle. 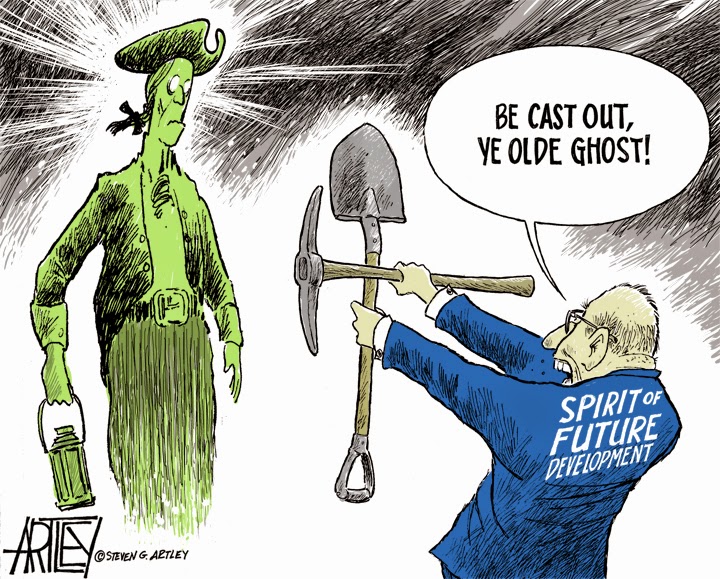 From the Artleytoons' vault, I dug out this cartoon that never saw print. News about disparity between whites and minorities in the Viginia gifted students programs made me think of those old scenes of separate bathrooms and water fountains. My editor felt the cartoon would open old wounds here in Viginia. So, it was nixed.

I'm a Yankee transplant here, so only know the history from a distance. But, there are places where records of the old days can be found. The Pentagon (built at the beginning of WWII) has twice as many toilets and water fountains as necessary, because planners had to follow Virginia segregation laws.

Things are quite different now; more than just the laws. In fact, I see much more social integration here than I ever saw in the Midwest, and not confined to the "enlightened" cultural elite. Among both young and old, women and men, on street corners and in coffee shops — mixed races hang out together. I rarely saw that in the "progressive" Northern states where I grew up. So, perhaps the editor had a point in not wanting to open old wounds that are apparently healing so well.

That doesn't mean bigotry, racism, and disparity in the system does not exist. They may not be blatantly evident as separate water fountains, but there are undertones.

In retrospect, I think this cartoon should have been published, regardless of the editors' concerns. Editorial commentaries of this nature are designed to provoke thought, despite what "old wounds" it may provoke. There is evidence that divisive inequities are still pervasive in principle. And, this image is a bold reminder of that, however uncomfortable it may be.
1 comment:

From the Artleytoons Vault: TheDC-10 Turkey 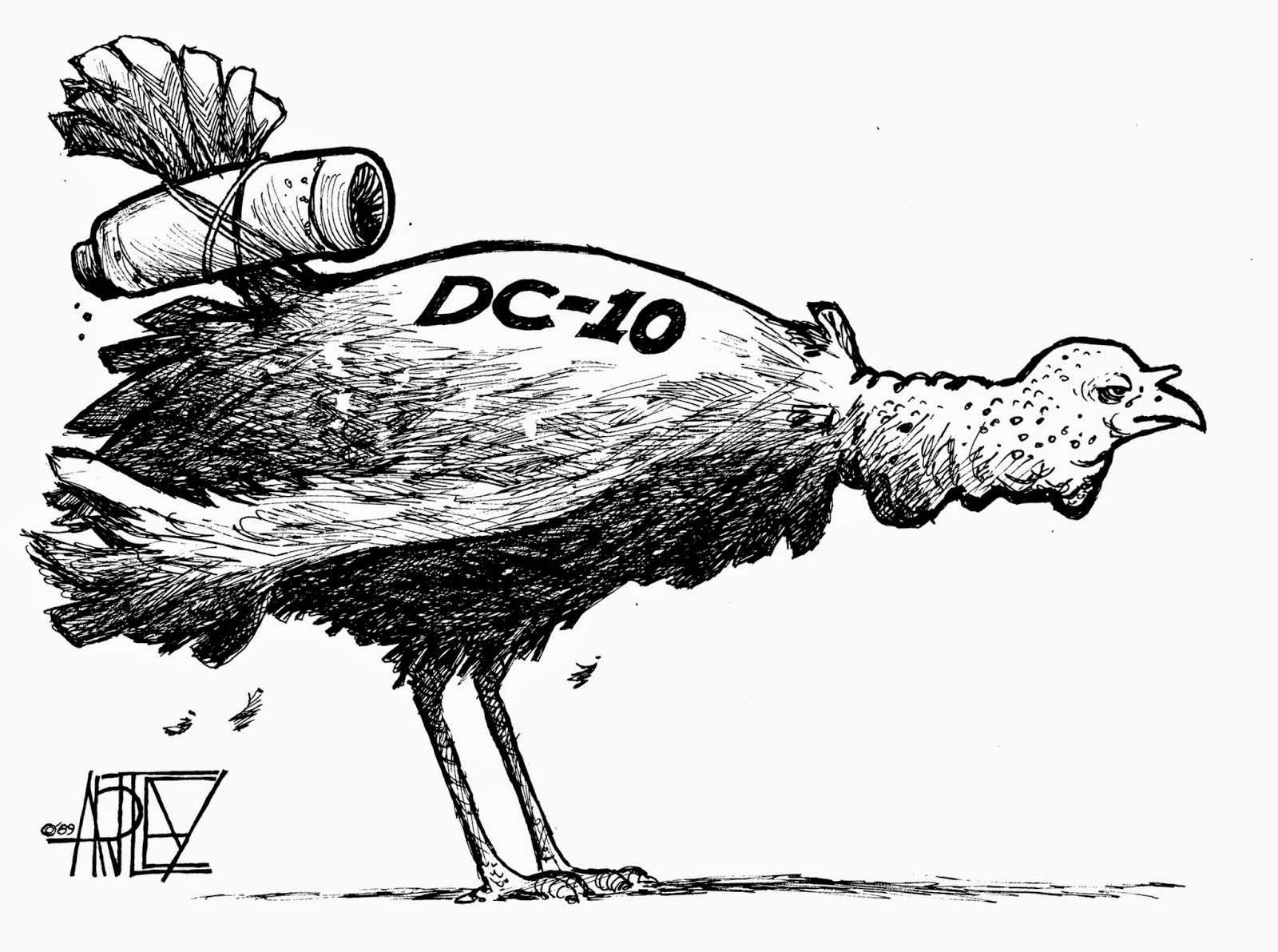 Artleytoons Classic (1989). Due to a series of crashes, hydraulics problems, cascade failures, and even engines falling off — McDonnell Douglas DC-10 began to suffer a bit of a stigma.
No comments: 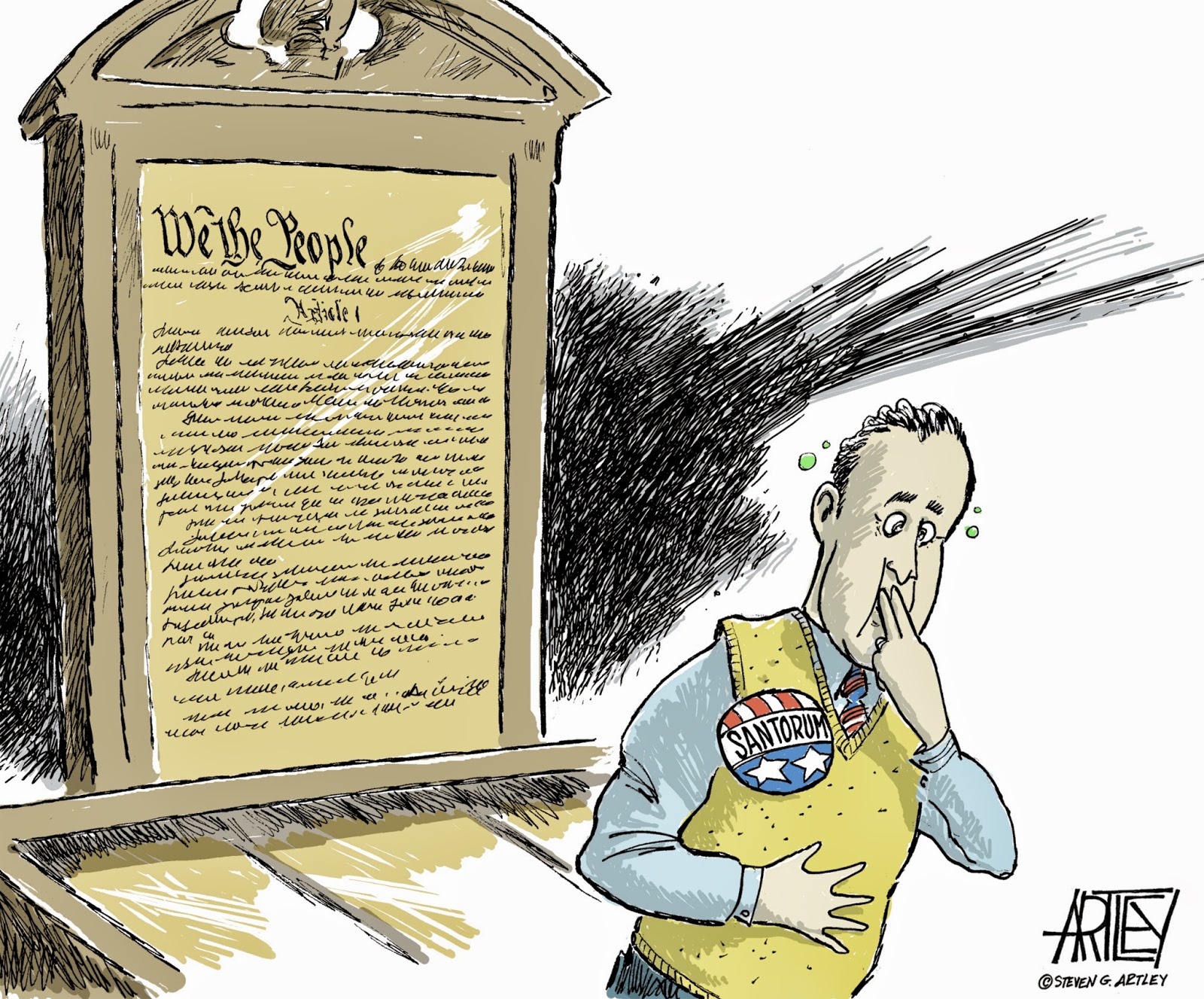 
During the campaign, Rick Santorum, the ultraconservative presidential hopeful, said when he read John F. Kennedy's promise to maintain an absolute separation between church and state, it was an idea that "makes me throw up."
No comments: