Remember Ollie North? Many of you may know him as a radio talk show host or a TV commentator. But, long before he stepped into these roles, he stepped in something else a few years back.

Back in the mid 1980's, Oliver North was a central figure in the Iran-Contra scandal that rocked Washington and the Reagan White House. North, a NSC staffer, was instrumental in the clandestine sale of weapons to Iran as part of a deal to release American hostages held in Lebanon by Iranian-backed extremists. Part of the funds were diverted to the Contras, an anti-government rebel group in Nicaragua. Because of widespread atrocities and human rights violations by the Contras, Congress had prohibited funding this militant group. And, of course, with Iran being our bitter enemy, providing arms to them was also frowned upon.

Some saw North as a great American hero. Others, including the law, saw him as a criminal, ignoring Congressional authority as defined in the U.S. Constitution. He and several others were indicted, including the Secretary of Defense Casper Weinberger. Although eleven people were convicted, some were let off on appeal and the remaining were later pardoned by George H.W. Bush when he became President, who of course, was Reagan's V.P. at the time of the affair.

Just how high up the chain of command the scandal went in the Administration was unclear, as evidence was withheld by Administration officials, and Oliver North and others in the illegal operation destroyed volumes of damning evidence. Of course, Ronald Reagan "forgot." During Congressional hearings, North admitted, "some documents were shredded."

So, I created this cartoon: 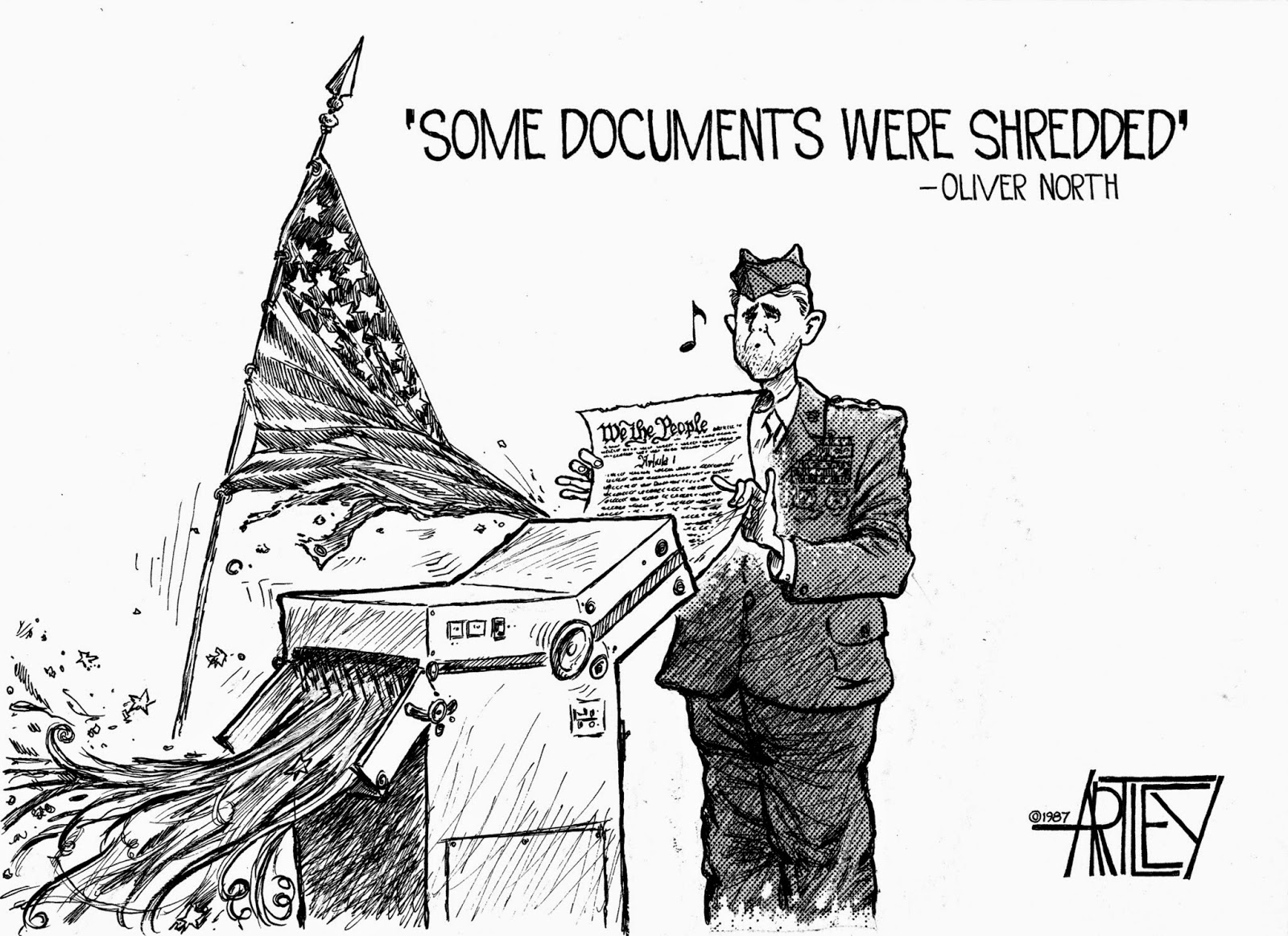 Jesse Helms, five-term Republican U.S. Senator from North Carolina was no stranger to controversial remarks, including the usage of terminology for black people that often made North Carolinians blush. He was also known as a staunch critic to public support for the arts. This came to a head in 1989, when a controversial touring exhibit of homoerotic photographs by Robert Maplethorpe and funded by the National Endowment for the Arts, was scheduled for display at the Corcoran Gallery in Washington, DC. Jessie used this provocative exhibit as proof public funding for the arts should be completely suspended.

This prompted my cartoon from the summer of 1989. A fellow cartoonist, who was at the Charlotte Observer at the time, called to tell me it was published in his paper. So, with all likelihood, Senator Helms who was an avid fan of editorial cartoons (especially those critical of his policies) saw this one. 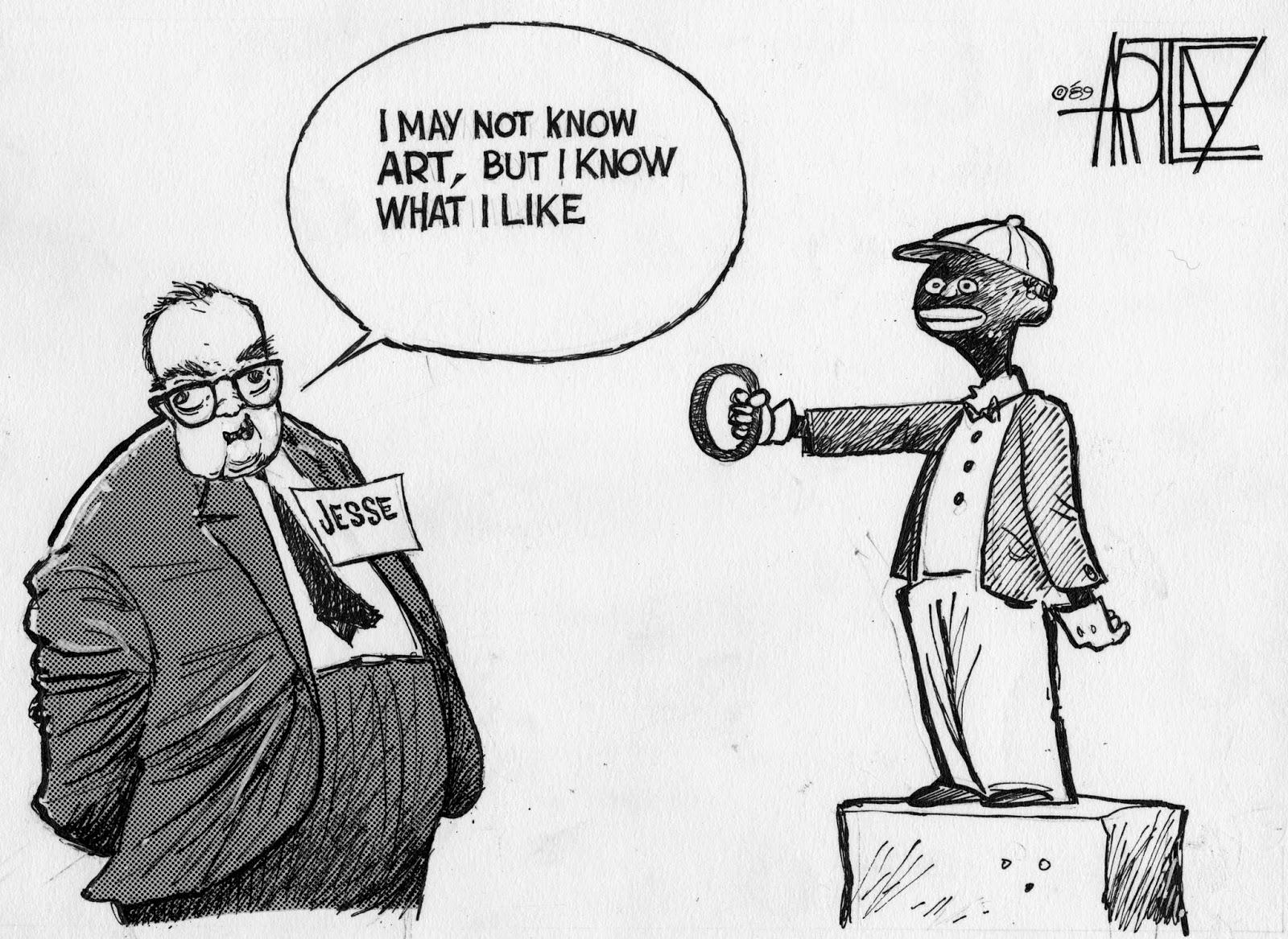 The Lusty Month of May

Leading up to the 1988 Presidential elections, Gary Hart was considered the Democratic frontrunner. In May of 1987, reports of his "womanizing" antics provoked Hart to issue a dare to reporters. He challenged them to follow him around, saying "go ahead. You'll be bored." Miami Herald Reporters who took him up on the dare by staking out his Washington DC townhouse, spotted a young woman leaving the house during the night. On May 8, a week after the story was published, Hart dropped from the race. Later that summer, the National Enquirer published a photo of Hart on his yacht, 'Monkey Business" with the same young woman sitting on Hart's lap. Despite the controversy, in December with his wife at his side, Gary Hart announced that he was re-entering the race.

Regardless of Hart's general support in opinion polls, election primaries the following year showed voter support for Hart had eroded. Once the nearly undisputed frontrunner who many thought would take the presidency, resigned again. Michael Dukakis became the Democratic Nominee. Dukakis lost the election and George Herbert Walker Bush became the 41st president of the United States.
No comments: 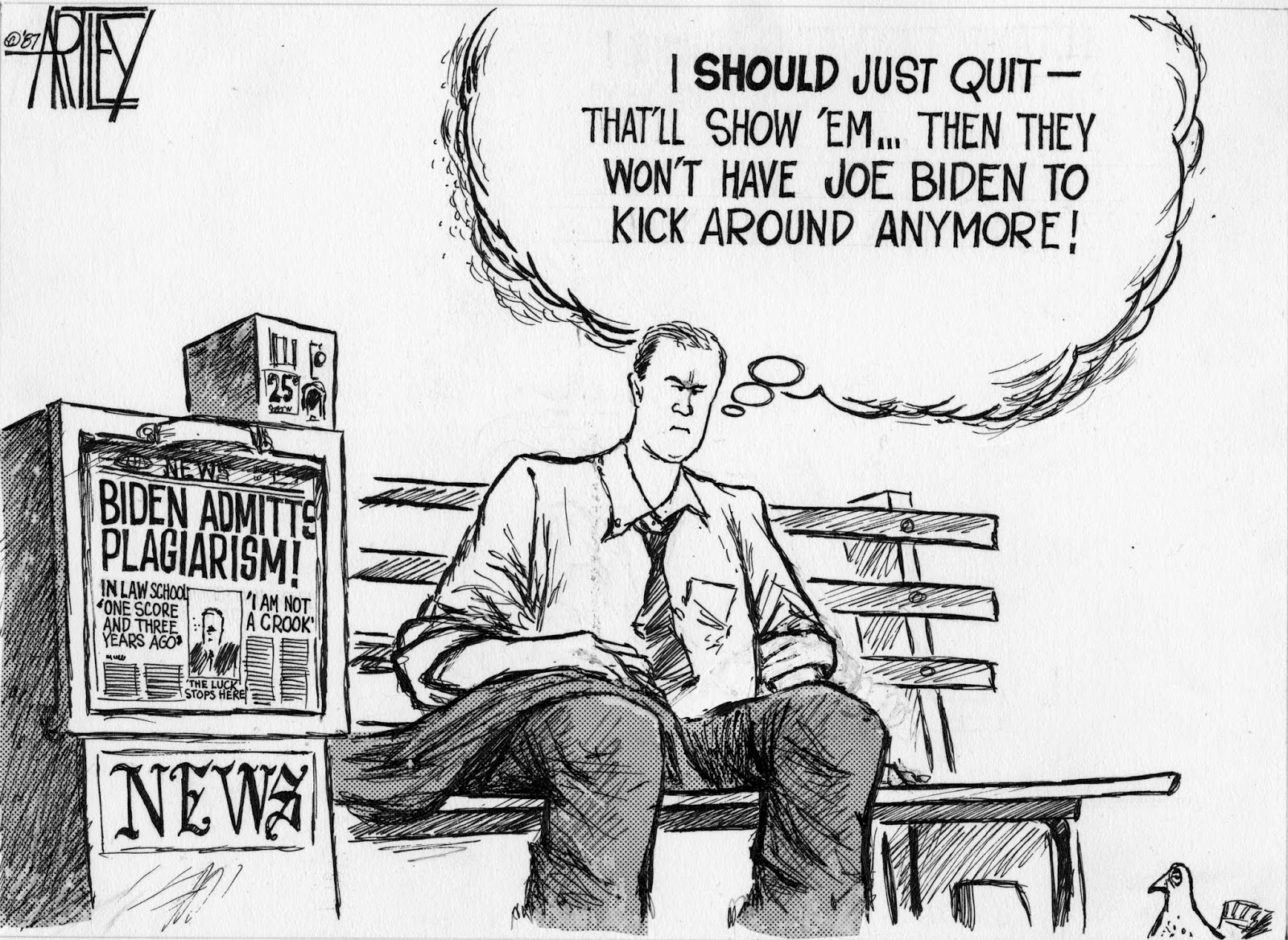 (click on image for a larger view)
No comments: 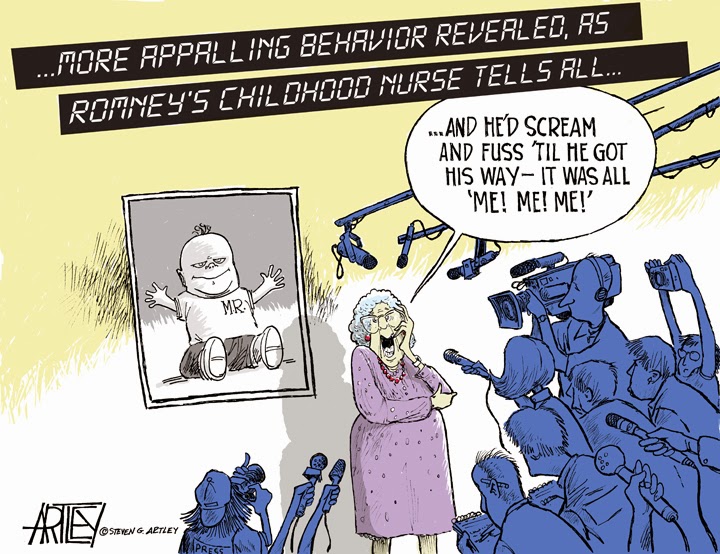 Shortly after the Pulitzer awards, an article in the online magazine Slate berated Matt and criticized the Pulitzer board for keeping editorial cartoons among their esteemed prize categories. The author felt Infographics, blog-generated Listicles, and other memes were more deserving than the "archaic and timeworn" editorial renderings of political cartoons. Although the attack by Slate's Technology Columnist, who often ventures into civilized society to hammer out mean-spirited rantings, was unwarranted — I offer a bit of reality from a recent experience suggesting that the sentiment expressed in that article may not necessarily be an anomaly.

I recently attended the Virginia Press Association (VPA) awards ceremony where the highlight (for me) was hanging with colleagues and seeing friends. Now that the dust has settled, I am able to take a scrutinizing look at the awarding process.

I was pleased to have netted 1st Place (non-daily category) for one of my editorial cartoons. Drawn early last year for the Alexandria Times, the cartoon was also distributed by my syndicate throughout the U.S. and Canada and appeared in other publications, magazines, online cartoon anthologies, and newspapers, including the New York Times. Make no mistake. I am grateful for the recognition and humbly honored by this award.

But, this particular VPA award was not issued in the “Editorial Cartooning” category. There is no longer a category for Editorial Cartooning. There’s one for Editorial Writing, one for Headline Writing; even one for On-Line Slide Show, but not one for Editorial Cartooning. That category was removed a few years back and tossed into the broader category of Illustrations under the division "Analyzing and explaining the news through ART." The other category in this division is Information Graphics. It's described as, "original artwork (other than photographs or editorial cartoons) which is used to tell, explain or clarify a story through the use of maps, charts, diagrams, or other graphic devices."

The Illustrations category that now houses editorial cartoons is grouped along with "section covers, thematic works, and mood-setting art." Award criteria for this category is defined as:

…original artwork (other than photographs) used to enhance the
appearance of a page and/or the readability of news or feature content.

So, the editorial cartoon is now simply an “enhancement to a page,” according to the VPA.

Information Graphics, merits an award category all to itself. Even photography is broken down into nine separate VPA award categories. Editorial Cartooning no longer has one.

Editorial cartooning is a form of journalism that takes complex political or social issues and — through a combination of drawing and writing — renders them down into succinct statements, often using hyperbole and metaphor. They frequently add a twist of humor with a satirical twist to carry the message. Multiple panel, or single; black and white, or animated in full color — Editorial cartoons are stand-alone sociopolitical commentaries, not simply "page enhancers." The Pulitzer Prize has had editorial cartooning in its own award category since 1922.

But, back to the VPA awards.

Once attendees hear their names mentioned for 1st, 2nd, and 3rd places while their mugshots and entries momentarily flash on the big screen — the awardees remain glued to their seats for the "Best in Show" awards. These awards honor the best from each division. As each award is announced, the winner walks to the stage to be photographed receiving a beautiful plaque, while the crowd (those not asleep or carried out on stretchers) cheers.

Having won this award two years ago, and knowing that it is customarily not given to past winners, I was curious to see what wonderful artistic rendering took the prestigious honor this year. Last year the Best in Show went to a nicely done cartoon in what was called the Artwork division. The year before it went to one of my cartoons in what was known as the Illustration division. The year before that, they actually had (like the Pulitzer Prize) an Editorial Cartoon category all to itself.


This year, Best in Show (non-daily) went to an Information graphic. Devoid of illustration, maps, charts, diagrams, or other cleverly constructed graphics, this piece of work was simply a photograph with sans serif type and text-generated arrows superimposed over it. So, from among all the original illustrations, from among all the beautifully rendered paintings, impressive charts, outstanding graphics, and "page enhancing" editorial cartoons, this piece was chosen to represent the "best" in show for the category of "art."

I don't begrudge the winner his prize. It is a striking visual to be sure, and would "enhance the appearance of a page and/or readability of..." yadda-yadda-yadda. But, an information graphic comprised of a photograph with typesetting can hardly be compared to say a pen and ink drawing, a watercolor painting, or any one of other gorgeous hand-rendered creations in this broad, catch-all category labeled "art."

Perhaps the Slate article portends a pervasive trend. The editorial cartoon has gone the way of the buggy whip. Evidently, the Virginia Press Association agrees.
1 comment: 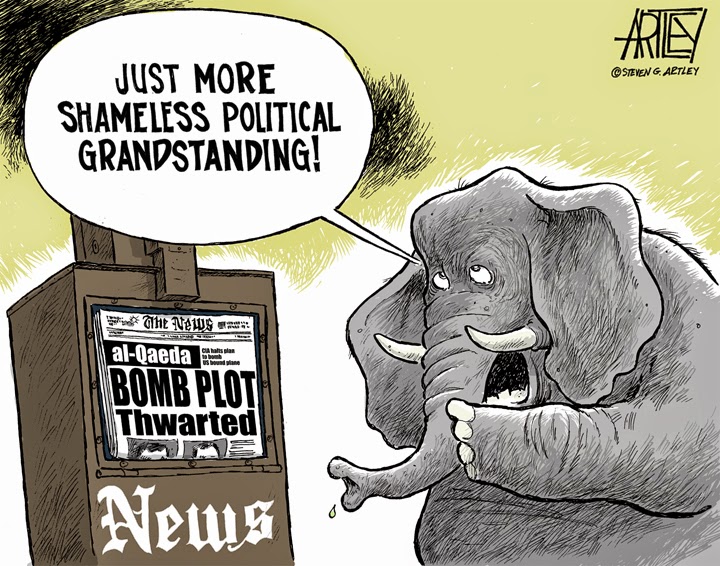 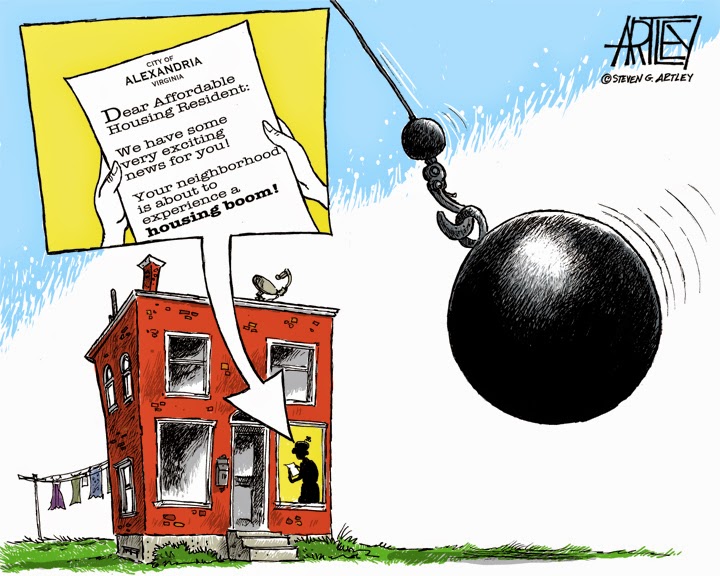 Local cartoon addressing the issue surrounding the current urban renewal program in Alexandria [VA]. City Hall contends that the razing of low income housing projects are being replaced with better, more modern housing. Reports, however indicate the number of units being built are lower than those being removed, leaving many families displaced.